By year two, as William Bradford’s long-odds startup finally stepped back from the brink of oblivion, he decided to hold a mandatory, three-hour staff meeting.

This wasn’t a party, an operational review or hackathon. The only item on the boss’s agenda that morning was to oversee a collective expression of gratitude, or as he termed it, “thanksgiving.”

Bradford, of course, was the governor of the Plymouth Colony, a poorly financed agricultural venture run by English separatists that gave birth to a fairly successful economic enterprise called America.

This meeting, held in 1623, was the colony’s first declared thanksgiving but there’s no record of anyone stuffing a turkey—this day was devoted to prayer. The Thanksgiving holiday’s traditional dinner commemorates a feast the colonists shared two years earlier, in 1621, with 90 Wampanoag tribesmen.

Deep down, however, beneath the trappings of food, family and often-forgettable football games, Thanksgiving is really a management story. It’s a case study in how extraordinary leaders build happy, productive teams. 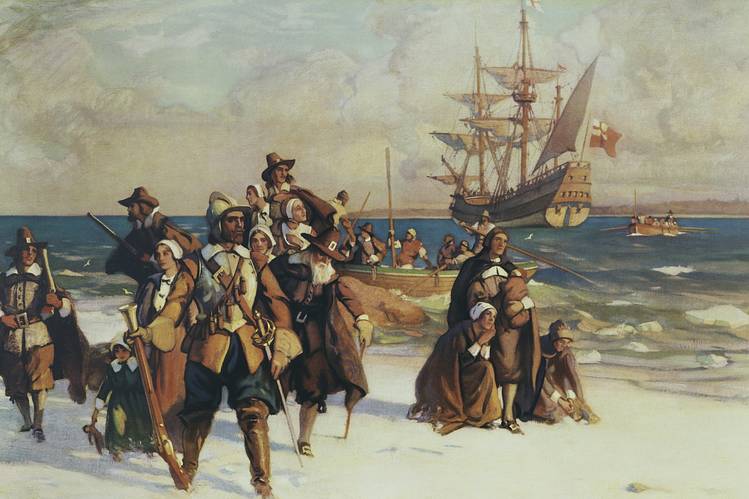 If you’ve yet to decide whether happy employees make a difference at work, you’ve either missed, or ignored a growing mountain of research. Happy workers not only score higher for engagement, productivity, loyalty, creativity, they take fewer sick days and are more likely to help their colleagues.

According to one study, companies with top-rated work environments consistently outperform the rest in revenue growth and stock price; sometimes by a factor of two to one.

To many people, Silicon Valley is the world’s capital of happy offices; a land of ping-pong tables, lavish buffets, complimentary dry-cleaning and unlimited vacation days. In a 2012 internal study, Google determined that its most productive teams enjoyed a feeling of “psychological safety” in which everyone believes that their input is welcomed and valued.

There’s another side to the story, however.

In “Lab Rats: How Silicon Valley Made Work Miserable for the Rest of Us,” Dan Lyons cites a PowerPoint presentation released in 2009 by Netflix Chief Executive Reed Hastings. The slide deck, which has been viewed hundreds of thousands of times and cited often by other tech executives, outlined the company’s values, culture and management philosophy.

At Netflix, it said, “high performance” is a core value. Hard work isn’t relevant, only results—so employee performance is closely monitored and firings are viewed as normal events. The company likens itself to a pro sports team with “stars” at every position and believes that subpar workers “should get a generous severance now so we can open a slot to try to find a star.”

As one slide put it: “Netflix doesn’t have to be for life.”

To Mr. Lyons, this brand of radical candor and transparency, which produces open discussions about whether people should be fired, reflects a brutal new compact lurking behind Silicon Valley’s playful facade. “No matter where you work, and no matter how well you’re doing,” he writes, “your job is never secure.”

Netflix doesn’t appear on most of the recently published rankings of the best places to work, although it was listed second among large companies on Comparably’s 2018 “Happiest Employees” list, which was based on anonymous feedback. What’s missing from the Netflix manifesto is any mention of gratitude.

The colonists at Bradford’s assembly, by comparison, had little to be thankful for. They certainly weren’t flush with stock options. In the colony’s first year alone, roughly half of them died. The principal focus of their gratitude in 1623 was a rainy spell that ended a lengthy drought.

Bradford was not the only American leader who tapped the power of Thanksgiving. In 1789, when it wasn’t clear that the divided young republic would survive, its first president, George Washington, declared a Thursday in November a day of Thanksgiving.

In 1863, Abraham Lincoln, buoyed by the first favorable turn in the Civil War, took Bradford’s legacy even further. He signed a proclamation making Thanksgiving an official holiday.

Simply put, Thanksgiving is the only direct link between three of America’s greatest leaders. Bradford, Washington and Lincoln all presided over dark, challenging times and, at the first sign of deliverance, sought to heal divisions, lift morale and build resolve by fostering a spirit of thankfulness.

If emotions could be bottled and sold, gratitude might be a controlled substance. Research shows that people who express thankfulness can experience a happiness “high” that lasts for up to a month.

An experiment conducted by Robert Emmons and Michael McCollough found that subjects who made a daily list of things they were grateful for showed higher levels of optimism and enthusiasm, exercised more regularly and made greater progress on personal goals.

A 2012 survey commissioned by the John Templeton Foundation found that a majority of people believe gratitude pays dividends at work. Of those surveyed, 71% said they’d feel better about themselves if their boss expressed more gratitude for their efforts, while 81% said they would work harder.

At the same time, people were less likely to express gratitude at work than any other place, and only 39% were grateful for their jobs.

Most leaders who set out to build grateful cultures often start by thanking their employees. Douglas Conant, the former CEO who engineered a turnaround at Campbell’s Soup, once said he’d sent 30,000 handwritten notes to everyone from senior executives to maintenance workers.

While these tactics can help, Bradford’s Thanksgiving model suggests that building happy teams isn’t just a top-down job. Friendliness and gratitude need to flow in many directions at once; from leaders to followers, followers to leaders, colleagues to colleagues and even employees to customers. 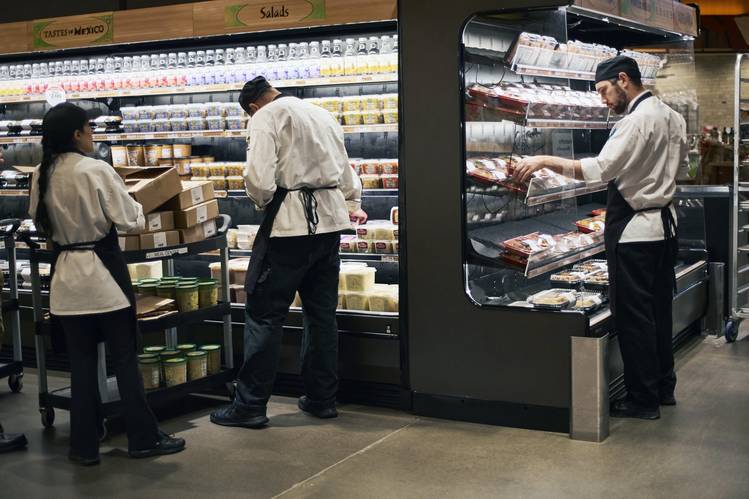 One company that seems to have cracked the gratitude code is a closely held, family-run supermarket chain called Wegmans.

In addition to increasing its revenue to $8.7 billion in 2017 from $5.1 billion in 2009, the Rochester, N.Y.-based firm has been hailed for customer loyalty, brand reputation, ethics and community involvement. Fortune ranked it No. 2, just behind Salesforce , on its 2018 list of the 100 best companies to work for.

Wegmans keeps a relatively low profile but has a fanatical following. At a recent store opening in New Jersey, 2,000 people lined up before 7 a.m. to be among the first inside. “It reminded me of when the Beatles came to America,” one township official said.

While loyal shoppers, or “Wegmaniacs,” rave about the company’s well-stocked shelves, prepared foods and generous return policy, what really stands out is that everyone just seems glad to be there. “Thank goodness for our employees,” Wegmans Chief Executive Colleen Wegman recently said. “They make Wegmans a happy place to work and shop.”

Wegmans management shows appreciation by offering its employees flexible scheduling, upward of $50 million a year in training programs and awarding them millions in college scholarships.

That’s a virtuous circle. And it’s not bad for the bottom line.

The modern Thanksgiving holiday hasn’t done much to advance its own cause at work. It’s so focused on family that we’ve become conditioned to think of gratitude as something we express at home.

Given the recent onslaught of change and disruption, many business leaders, even those who see the benefits of gratitude, are less inclined to invest in building emotional bonds at the office. If it’s not handled well, a “work Thanksgiving” might feel forced or devolve into obsequiousness.

Netflix’s manifesto expressed this sentiment plainly: “We’re a team, not a family.” 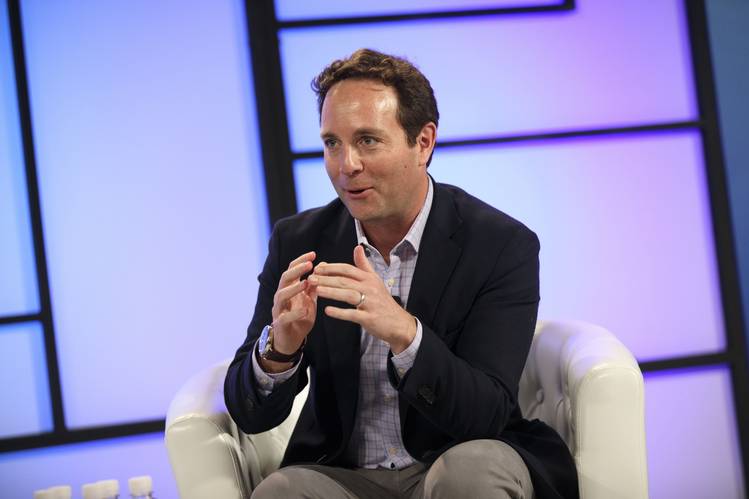 Spencer Rascoff strongly believes that a positive workplace culture can drive business success. The chief executive of Zillow says he spends hours poring over employee survey results. His company appeared at No. 57 on Glassdoor’s 2018 list of the 100 best places to work.

Sometimes, though, when he sends a congratulatory email to a staffer, he receives a response that makes him uncomfortable: “I’m so happy to be part of this family.”

A family, as Mr. Rascoff sees it, consists of our spouses, kids and close relatives—the people we stand by no matter what. “A company is really more like a team than a family,” he argues, because membership can be revoked. For a company to adapt and thrive, underperformers need to be managed out.

Zillow isn’t opposed to foosball tables, nerf guns and other Silicon Valley workplace hallmarks, but “that’s for the dopamine part of your brain, the primal part,” Mr. Rascoff says. “What’s really fun is winning.” The brain area he’d like to engage is the one that lights up from accomplishment and keeps employees fired up, connected to the mission and leaning forward in their seats. “It’s not happy—I’d say engaged,” he adds. “Teams like that do better work and produce better business results.”

The kind of contagion Zillow strives for isn’t appreciably different than the atmosphere at a Wegmans—or the mood that might have taken hold at William Bradford’s thanksgiving meeting in 1623. What’s surprising is how few companies have tried Bradford’s simple tactic. They might call hundreds of meetings a month but never for the sole purpose of expressing thanks.

One exception is Glitch, a 30-employee New York-based software firm that builds tools for app developers. During monthly all-staff town halls, people stand up to acknowledge the contributions of others.

In 2016, when he took over as the company’s CEO, Anil Dash was skeptical about the tradition. “It feels kind of corny in the modern world,” he says. But like many new hires, he was “surprised to the point of disbelief” by how well it worked. Expressing gratitude not only feels good, he says, it improves communication and puts greater focus on what makes customers happy.

It also makes people feel vulnerable and emotional, he adds, which “builds trust within the team.”

It might seem odd to take business advice from a religious pilgrim who lived 400 years ago. But the Plymouth Colony also had investors, production goals and a mission larger than any one person. It was a classic startup.

Maybe gratitude drove its success, or maybe not. One thing is certain, however: It couldn’t have hurt. And it didn’t cost a dime.

—Mr. Walker, a former reporter and editor at The Wall Street Journal, is the author of “The Captain Class: The Hidden Force That Creates the World’s Greatest Teams” (Random House).

"Newspapers, from their cheapness, and the frequency and rapidity of their circulation, may, in America, assume an eminent rank in the catalog of useful publications in a great degree, supersede the use of Magazines and Pamphlets. The public mind in America, roused by the magnitude of political events and impatient of delay, cannot wait for monthly intelligence. Daily or at furthest weekly communications are found necessary to gratify public curiosity."

Special to the Newsletter

Special to the Newsletter

The “Other” First Lady of the Civil Rights Movement: Coretta Scott King

The “Other” First Lady of the Civil Rights Movement: Coretta Scott King